Making of the ATUR CHATUR

Respected Sir,
Most humbly & respectfully I beg to inform that, I am Atur Chatur which is my pen name at xyz forum
My true profile has been listed at the profile aturchatur at xyz forum

You are requested to kindly provide me the Action Taken Report which is also the right of the complainant to know the status of his complaint as above.

It is further informed that some more people have joined to the group of people discussed above with the intent to harm/ cause injury/ defame the reputation / continuous extending of threats/ threatening being inflicted upon the applicant directly & indirectly which can also be proved from the records that I am maintaining for thy purpose & can be submitted as & when required/ called for.

It is also informed respectfully that, despite the above complaint & also the following:-
Source:- xyz forum/xy2
these accused seem so fearless of the law that they are openly flouting the laws of the land. Therefore, the applicant also feels apprehensive to his life & requests to your esteemed authority to provide immediate police protection to the applicant.

In this regard, I request all communication to be made with me in writing so that I can provide all the details in respect thereof against all those law breaking citizens who try their every bit to deprive me of my right to freedom of speech & expression which can also be evident while you go about the whole link at:-
Source:- xyz forum/xy3

I again request your esteemed authority to kindly review the threats at the abovesaid link & initiate action against those involved throughout including all those who joined later in this criminal conspiracy against me r/w relevant provisions of IPC & CrPC and the sections & sub-sections contained therein which suit best.

That the applicant most humbly requests the cyber crime guys, PS/PHQ/IAS within this forum to preserve the life & liberty of the applicant which is also guaranteed vide constitution of india.

I request you to provide me with the action taken report at the earliest. If not I'll be compelled to approach the Central Vigilance Commission &/ or Delhi High Court &/ or http://www.pgportal.gov.in for any attempt to suppress my complaint or any deliberate inaction or unexpected delay.

PRAYER:-
That the applicant most humbly prays with folded hands that all/any of the accused shall be bought to justice & their spouses & families be informed of their acts.

RESULT OF THE ABOVE COMPLAINT
Friends, as a result of the above complaint by me especially the reminder complaint by me, (I do NOT want to disclose whether I actually sent that complaint to Cyber Cell or NOT.) most of those top notch agents/ commission agenst or pretentious vicitims of false cases RAN AWAY from that forum keeping their FOOT ON THEIR HEAD even after (immediately after) my profile got deleted from that forum. Interestingly, some of my friends, who used to post/ talk regularly at that forum and who were real fighters and who had a lot of knowledge and from whom  I learnt a lot, they also left that forum. It was almost an empty scenario so I DECIDED to start guiding people through a paid-cumfree service. As part of paid service the false cases suffering husbands/ harassed husbands can get appointment with me for consultation over the phone for which I charge some fees and after paying fees I guide them on phone about some counter tactics. And if they want me to write their court petitions or written statements, divorce cases, RCR petition or perjury application, CrPC 91, RTI’s FA, SA, CIC then I duly assist them after they pay me my fees. But there are more than 90% men victims of false cases who don’t have money to pay for my consultation and for such people I have put a lot of examples & petitions samples or other counter cases/ strategies or other knowledgeable matter at my various postings throughout the internet. Some of those links can be found at:-
http://AturChatur.com
http://RTIconsultantDelhi.blogspot.com
http://manhelpdelhi.blogspot.com
http://settlementwala.com
http://nriquash.com
http://humanrightsofnri.com
http://divorcewala.com
http://www.socialstigma.in
and many more links so feel free to search on internet. For example:- if you want to search my fighting tactics or suggestions regarding complaint against a judge then go to internet and type in inverted quotes as follows:- “complaint against judge” by “atur chatur” 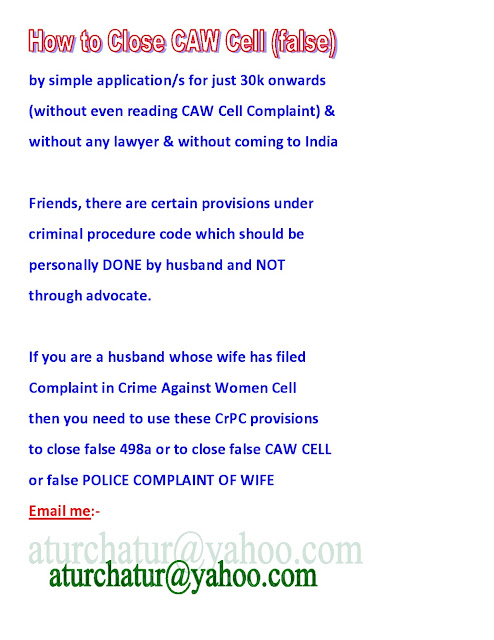 Popular posts from this blog

How to close false CAW or false FIR?